Michelle Obama Style: The Good, the Bad & the Ugly

Pron friends, I have seen the past few weeks in First Lady Fashion and I am not amused.  The Belt of Doom is back; actually every belt of doom is back, I’m seeing awful black pant…things, and jewelry that threatens to eat the entire country.  March had not been a kind month to Michelle Obama, my little pr0n pears and then…just when all hope was lost.  But I’m getting ahead of myself.

This month, Michelle Obama had the honor of being the first person ever to share the cover of O Magazine with Oprah Winfrey.

My first impression was that she looked fantastic.  Overall, that’s still true.  It’s a beautiful photograph of a beautiful woman, but there are really significant styling problems.

The colors together are gorgeous; vibrant coral and lemon yellow look great on the First Lady, and the whole thing just makes me feel happy all over.  The open neckline flatters her face.

The first problem is that awful belt that she wore when serving food to the homeless.  I’m sure the homeless had better things to worry about than her belt, but surely at O Magazine a very polite stylist could have guided her gently away from it.

It’s some sort of clear red wide plastic belt horror. “It came from the ’80s!!”  The rest of the problem is apparently the length of the cardigan.

What’s happening is that because the cardigan goes over her hips, it emphasizes rather than flatters or ignores.  In combination with the sweater, the belt chops her in the middle, making her look heavier .

Mrs. Obama is wearing a variation on the same style here at Arlington National Cemetery.

I almost really like this outfit.  I love the layering of colors and fabrics that she’s using; the overall idea of this outfit is really very chic.

Can you spot the problem?  Once again her sweater is too long for her, and instead of hanging straight it’s pulling at the buttons.  That’s a sign of a poor fit.

No matter how cute those trendy “boyfriend” sweaters are, if it doesn’t fit over your hips, it doesn’t fit. There will be other sweaters.  Your blogger promises.

Here’s where things start to go terribly terribly wrong.  In this picture the President and First Lady are at Senator Ted Kennedy’s birthday party .

She appears to be wearing a piñata, combined with I don’t even know what for necklaces.  Here’s a closeup.

According to the First Lady’s Press Secretary, these are vintage pieces.  Lovies, sometimes “vintage” is just another word for “old”.

I like the dangly blue necklace as a piece by itself, but it doesn’t work with what she’s wearing (what would??).  The yellow thing. I…I’m speechless.  I have no idea.  I don’t know what it is, what it was, what it’s supposed to be.  My apologies to Senator Kennedy.

This week Mrs. Obama visited a school in one of the worst neighborhoods in Washington, DC to talk about growing up, and education, and First Daughters Malia and Sasha.

Can anyone tell me why she’s dressed like the Mother of the Bride Goes to a Funeral?  I just don’t get this outfit at all.

She’s wearing what may or may not be a pants suit.  The jacket looks like a raw silk, but the pants look like a smooth satin.  The whole thing looks like a fussy, too old, weird, ill-fitting mess.

I care too much, I know.  It just kills me to see such a stunning woman take such strange fashion left turns.  *sigh* One day, my little pr0n pies.  One day people will listen to me. 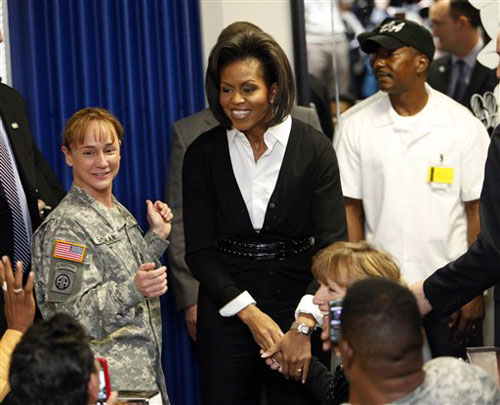 Again with the long cardigan/belt combination, black pants – possibly the same she wore to school? and a white button down shirt underneath.

There’s classic and then there’s boring.  I’m so bored I’m falling asleep (and not because it’s nearly midnight as I write this).  Why black??  Don’t our troops deserve to be cheered up?  How about brown?  Brown is a serious color, but it’s still a color.

Why not add a colorful necklace here?  Or a colorful belt (though I’m still not crazy about this belt phase she’s going through).  Her face is glowing and radiant; I can’t say the same for her outfit.

Honestly she looks like she’s going to sit shiva.  Or maybe it’s me.

I’m delighted to be able to end this post on a high note.  Today Mrs. Obama went to the ground-breaking of the new White House kitchen vegetable garden.  I could cry tears of joy.

Mrs. Obama arrived in an oversized sweater/dress over a black turtleneck, and black leggings and paired with a black belt and black patent leather boots.

Here’s why it all works.  Without the belt, the sweater would look shapeless, keeping the outfit monochrome makes the whole thing long and lean, and overall it’s a a chic, relaxed style.  Personally I’d have exchanged the patent leather boots for a good pair of waterproof Wellies; this is DC in March we’re talking about after all, but no matter.

I’m giving this outfit an A. That’s right, this outfit takes the cake.  Well played, Mrs. Obama; our Shopping Pr0n hats are off to you.

That’s all for tonight my pr0n pecans.  More tomorrow!

Until then, it was good for me; tell me, was it good for you?

All photos courtesy of the AP and the Huffington Post